Complying with non-disclousure agreements, information presented in this case study is limited. 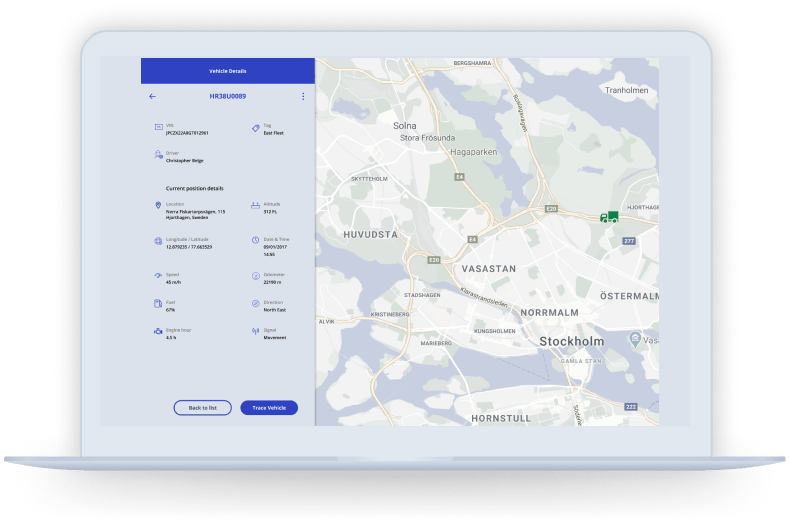 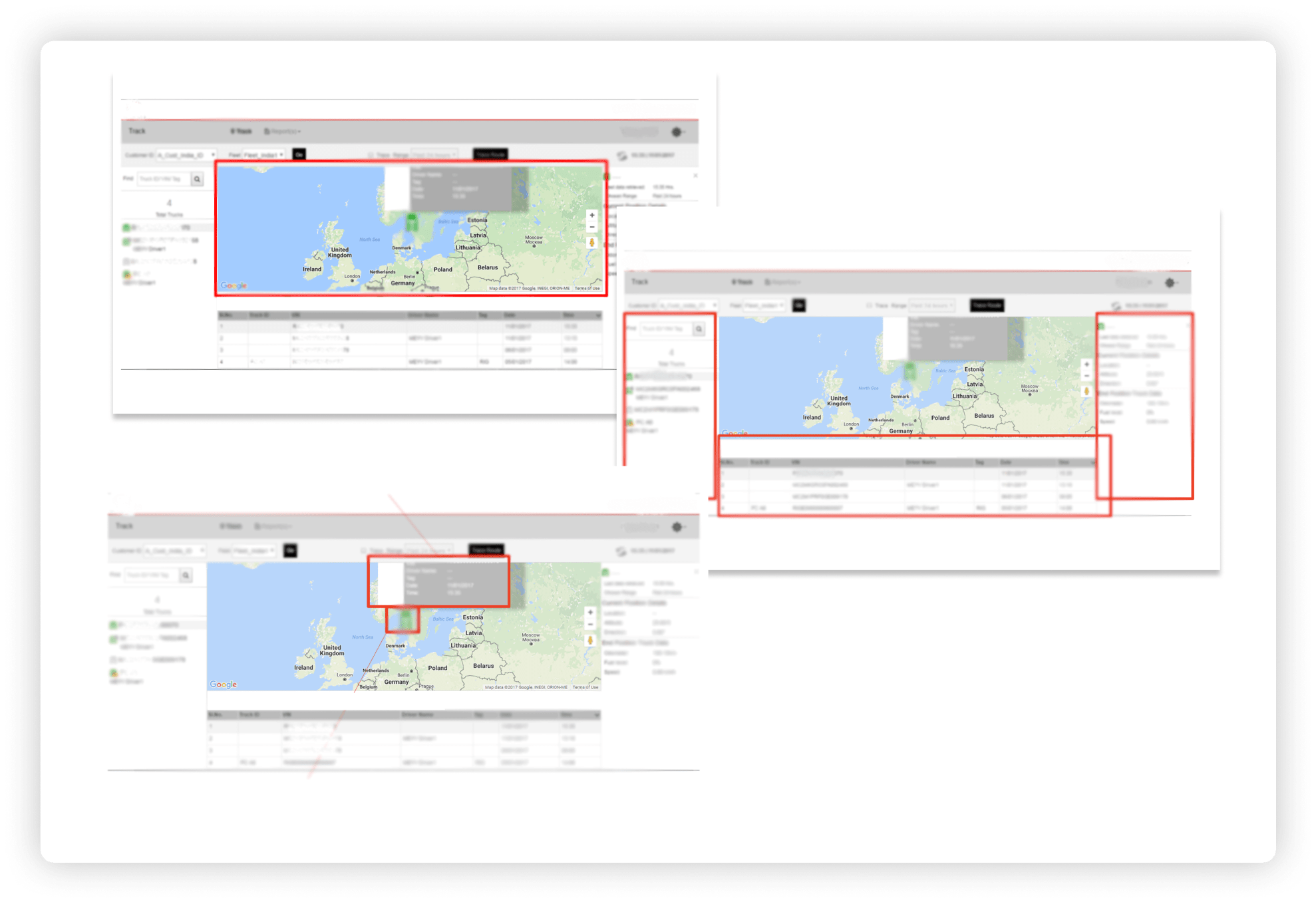 Screenshots of the application from evaluation report before redesign

I collaborated with business analysts, product owners, project managers, engineering architects and leads to understand the complexity & constraints which helped in defining the problem, planning and drive decisions.

Carefully analysed and choose specific requirements & features as per need keeping in mind its complexity, feasibility, timelines for execution.

After each & every design phase was internally completed and finalised, I had to pitch these versions of the designs to all concerned stakeholders at different levels for approvals with final approvals from company Director.

The process was kept simple and followed the user-centric design principles.

While tracking a vehicle, number of details are needed by the fleet managers and hence an application providing these details ensuring clear visibility of the fleet operations and vehicle information forms an integral part of their day-to-day work.
With a detailed heuristic evaluation, I was able to identify multiple usability issues for the track and trace feature.

Step back to move forward

During the initial days my focus was more on understanding the working of current application its utilisation by its users. As the unfolding happened, I realised, understanding the other system which interacts with our system was much necessary to get complete big picture of the information flow between various systems and the entire setup. 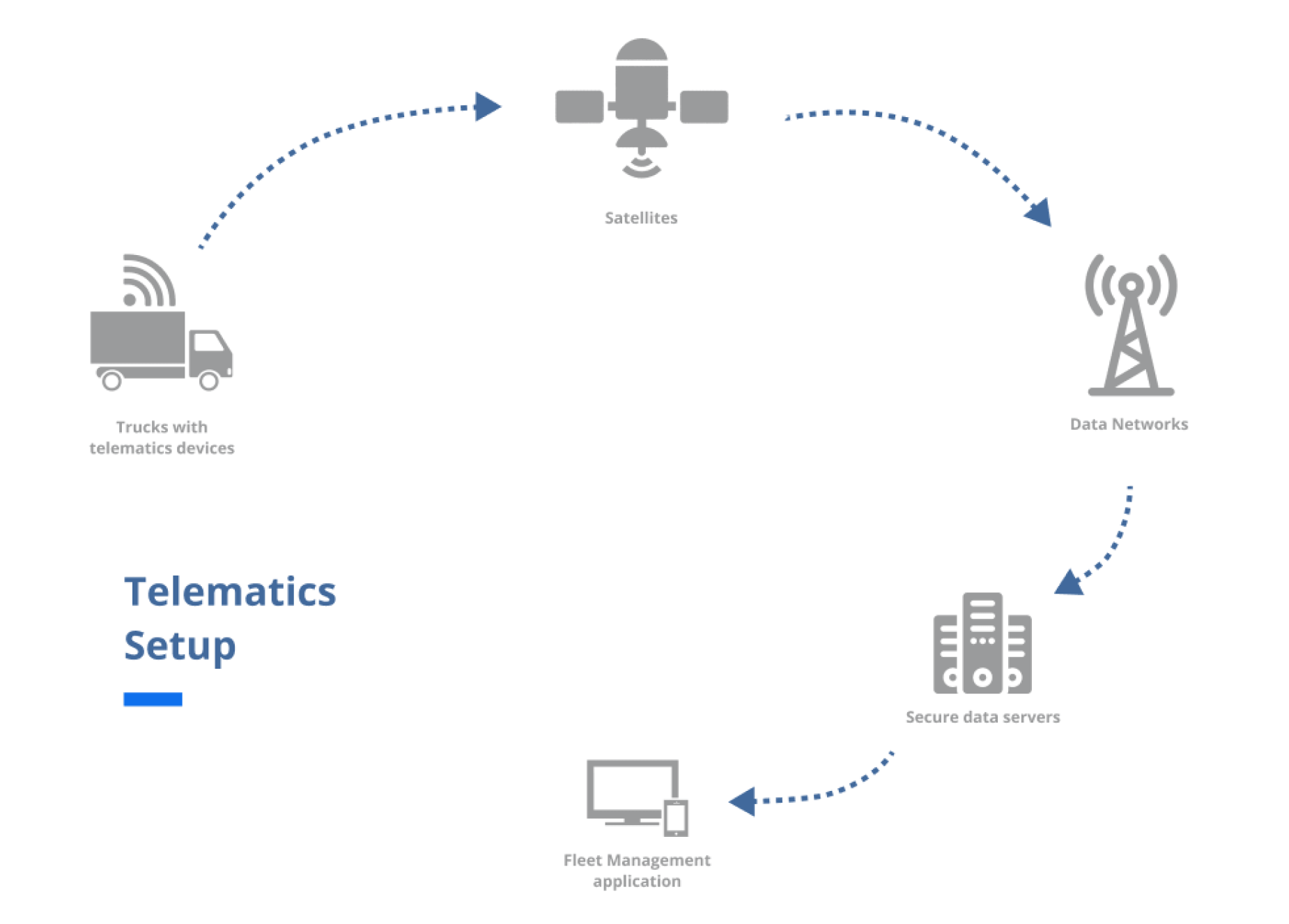 With a  survey that was done with the fleet managers  and with the help of user engagement stats, I was able to understand more about the main tasks of the users and thier pain points. 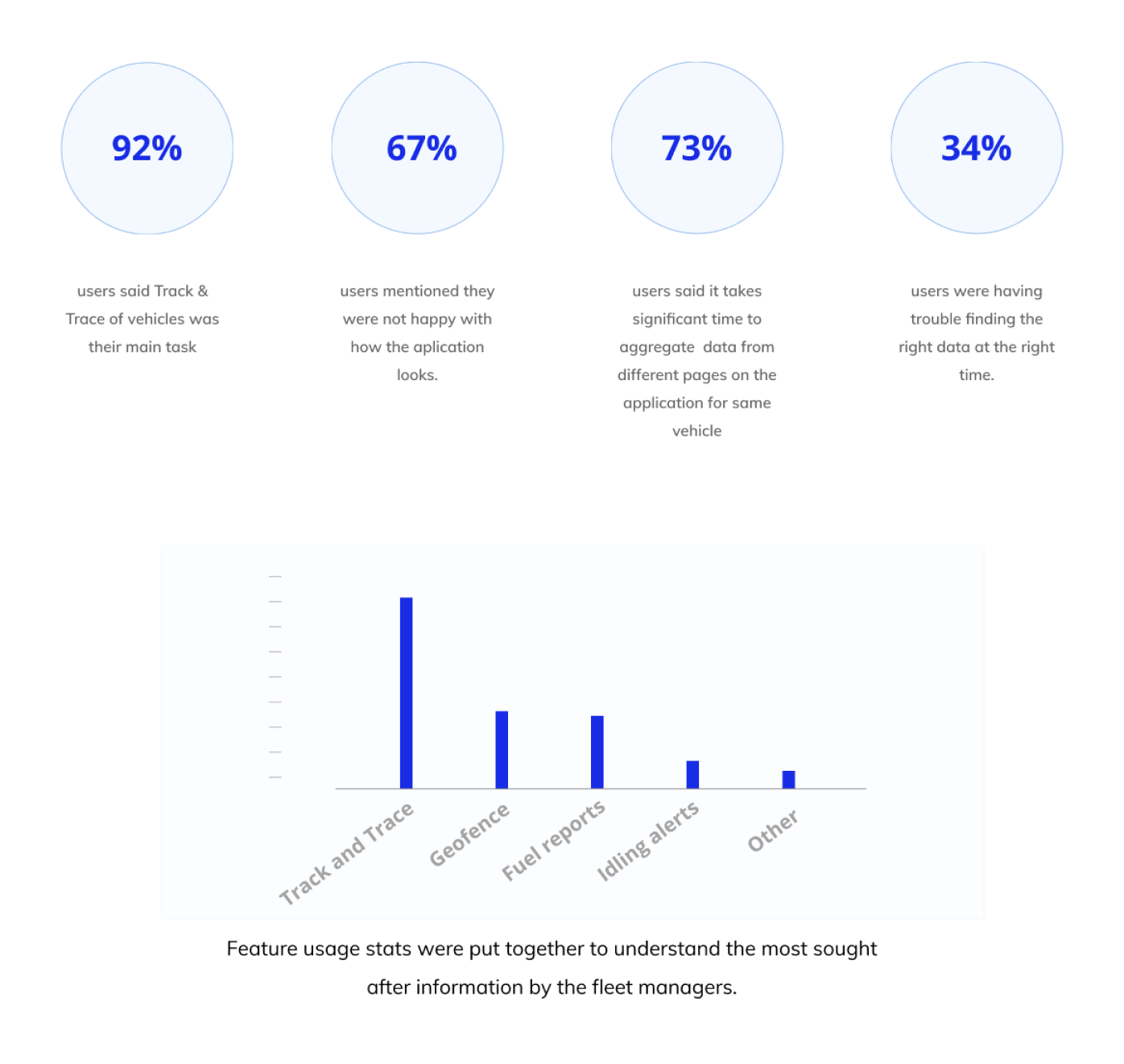 Once the big piture was visible, I was able to get the confidence to place the puzzle pieces more accurately. This gave me an understanding of the whole system and next step was to deep dive into understanding of the ‘Users’.
‍
The application was developed to the current level without having any designer and hence no user research was done until now. Though there was no direct access with the actual end users, the business analysts liasing with the clients had received a lot of feedback from them. And also the support team were helpful in filtering out the tickets dealing with the experience issues, which brought in wealth of info that I was intending to uncover.

To understand the users pain points I had to surface any issues that were present in the task flows, I started with  drawing them up. The concerns showed up and had to be addressed to ease the task of getting vehicle related info together. 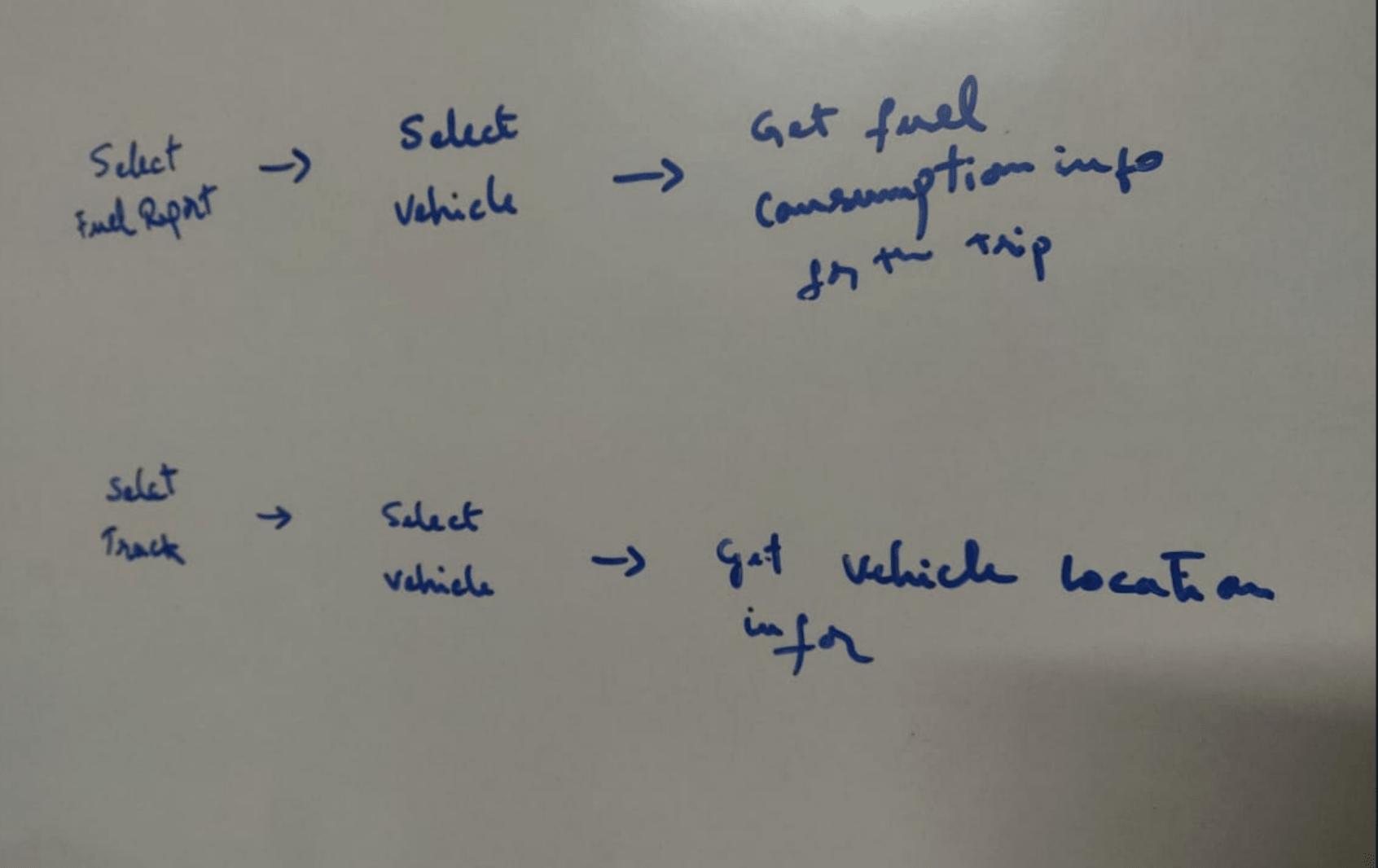 Each specific information was available on a specific page or a table which needed the user to select the  feature first then select vehicle to get to that specific info. This caused a lot of back and forth navigation and selecting same vechile multiple number of times.

These things brought an opportunity for a complete overhaul of the track and trace feature.

The image I had of a fleet admin would place them in a glass walled room with large tv for monitoring, a slick laptop with a giga band network, telephone and mobile phones, etc..  I was no where near to reality. I really wanted to meet as many fleet operators as possible to talk to them and know more of their day-to-day work and pain points, but due to many constraints my interactions with them were only through audio or video conference calls.
‍
Fleet admins / operators would be seated often in noisy crowded office spaces where other admins would also be seated or possibly close to a fleet service center. I was able to connect with 6 fleet operators. Most of them used an average desktop or a laptop with basic specs just enough to be able to trench through their daily routine work. Slow internet and network issues were common and they were forced to use their own phone data network and calls to drivers or others for acurate information.
‍
Topping all this was the frustrating interface of the fleet application which added to their woes.

With this understanding, different user persona’s were created based on various parameters like the fleet size, fleet admin age and experience levels, infra setup, devices and so on, similar to the following one. 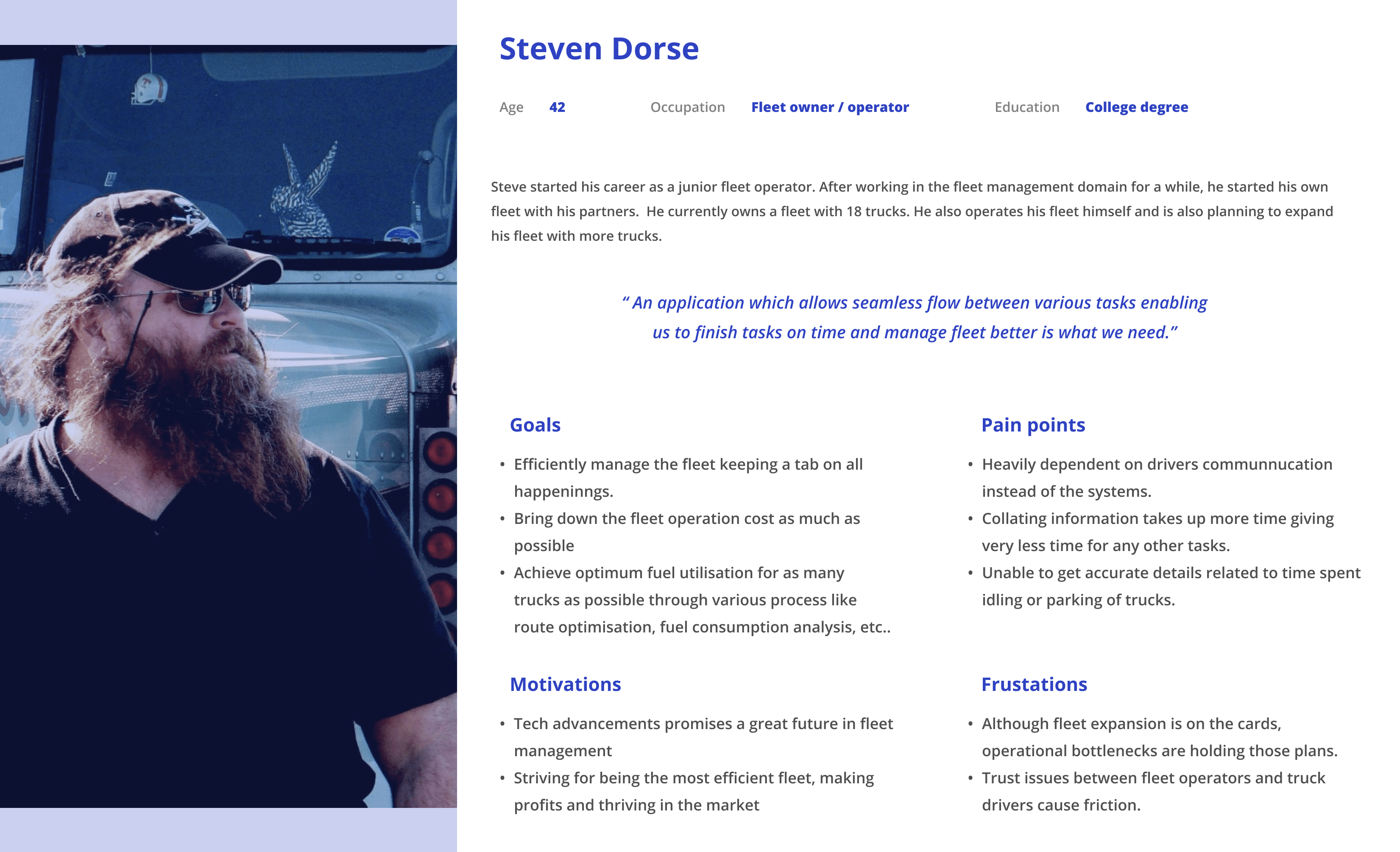 These personas were my north star. I would always look up to them to get a reference of the end users' tasks and also empathise with them. Having done these persona I was able to get a better understanding of the fleet operators needs. Features were prioritised based on these persona also helped me be more confident with my design decisions.

With all the data gathered, I started making use of it firstly by framing the use cases. While analysing all the inputs received, it led to identify the following main use cases.

I would like to know the current location of the truck and be able to trace the vehicle movement history.

At a high level this is how I was able to identify the issue and fix it. This simplified the process of collating all the related info together for the users during any tracking task for a vehicle. 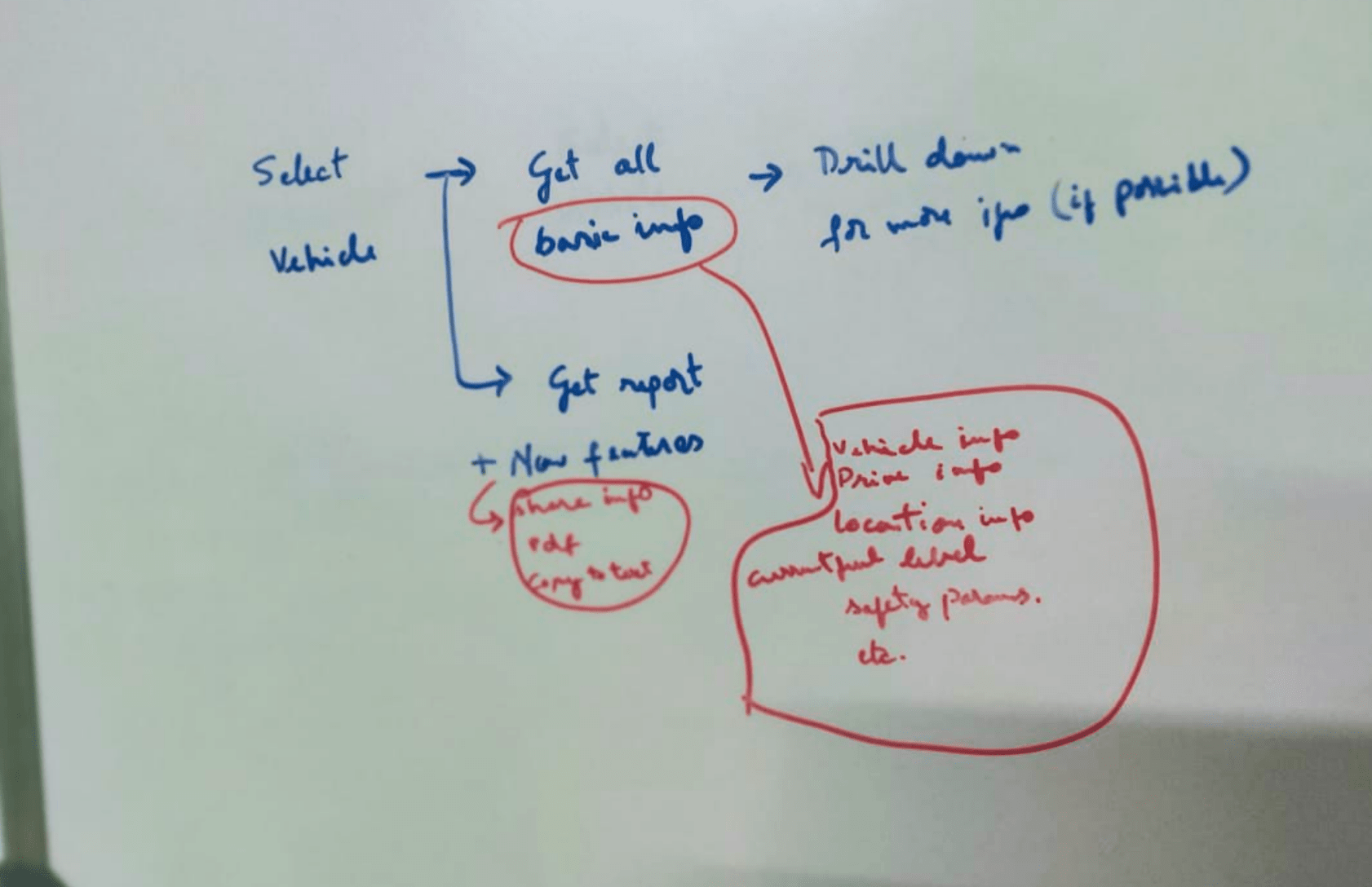 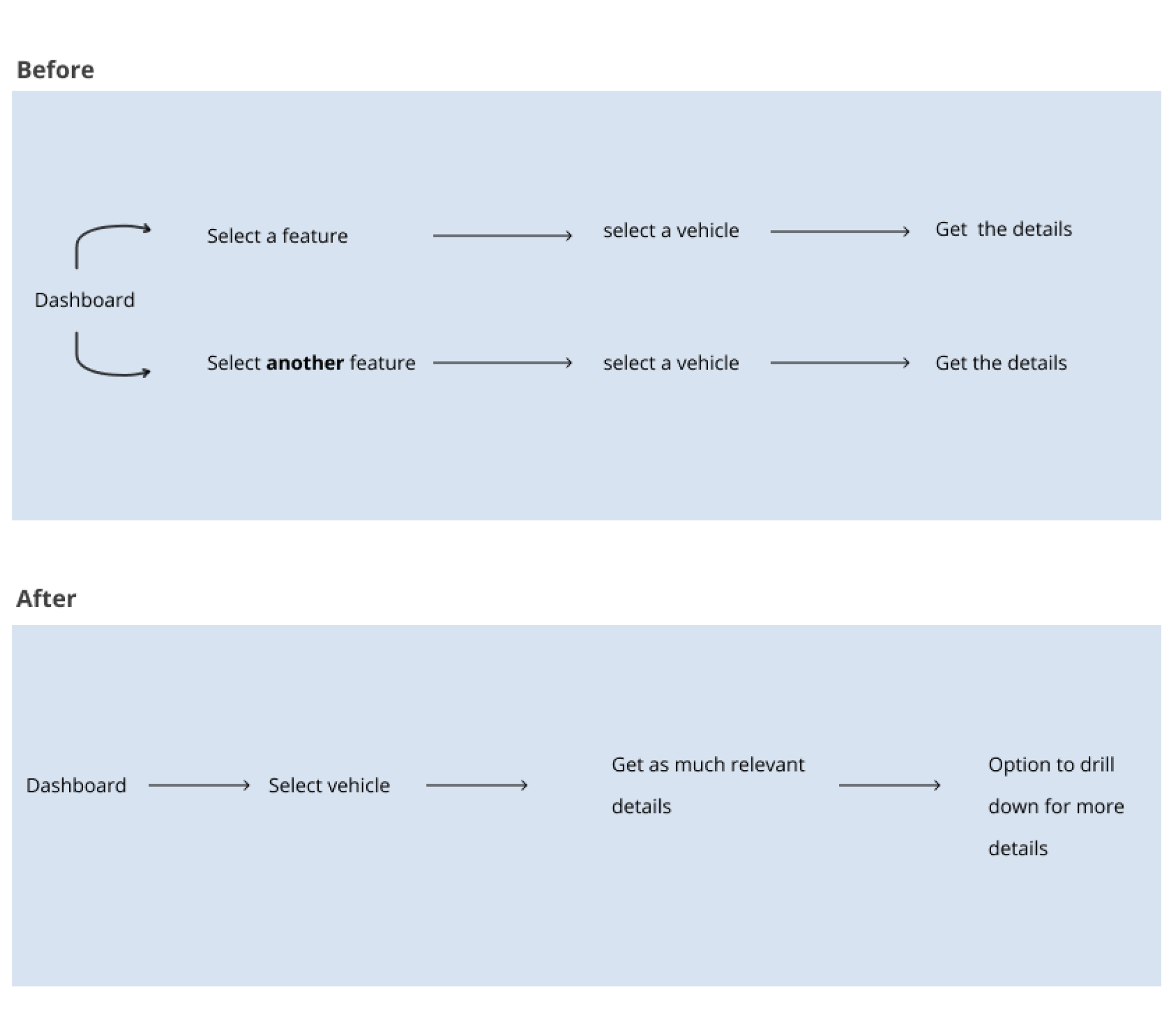 Task flow could not have been simplified without knowing which were the relevant info that was often collated by our users. This list of details that the users would need then m made eady to be taken forward and placed  together for easy consumption.


All of this work led me to my next step of sketching and mocking up the layout of the track page. A task that went into multiple iterations.

Once the ideas were all put down on paper, I filtered out the ones which most suited as the solution. I began putting up high level wireframes on Powerpoint and iterated on them whilst continuosly discussing it with the team.
‍
From the sketches, considering the most suitable layout that we could take forward, I created mockups using Balsamiq just to help the team visualise the layout holding the key data elements. 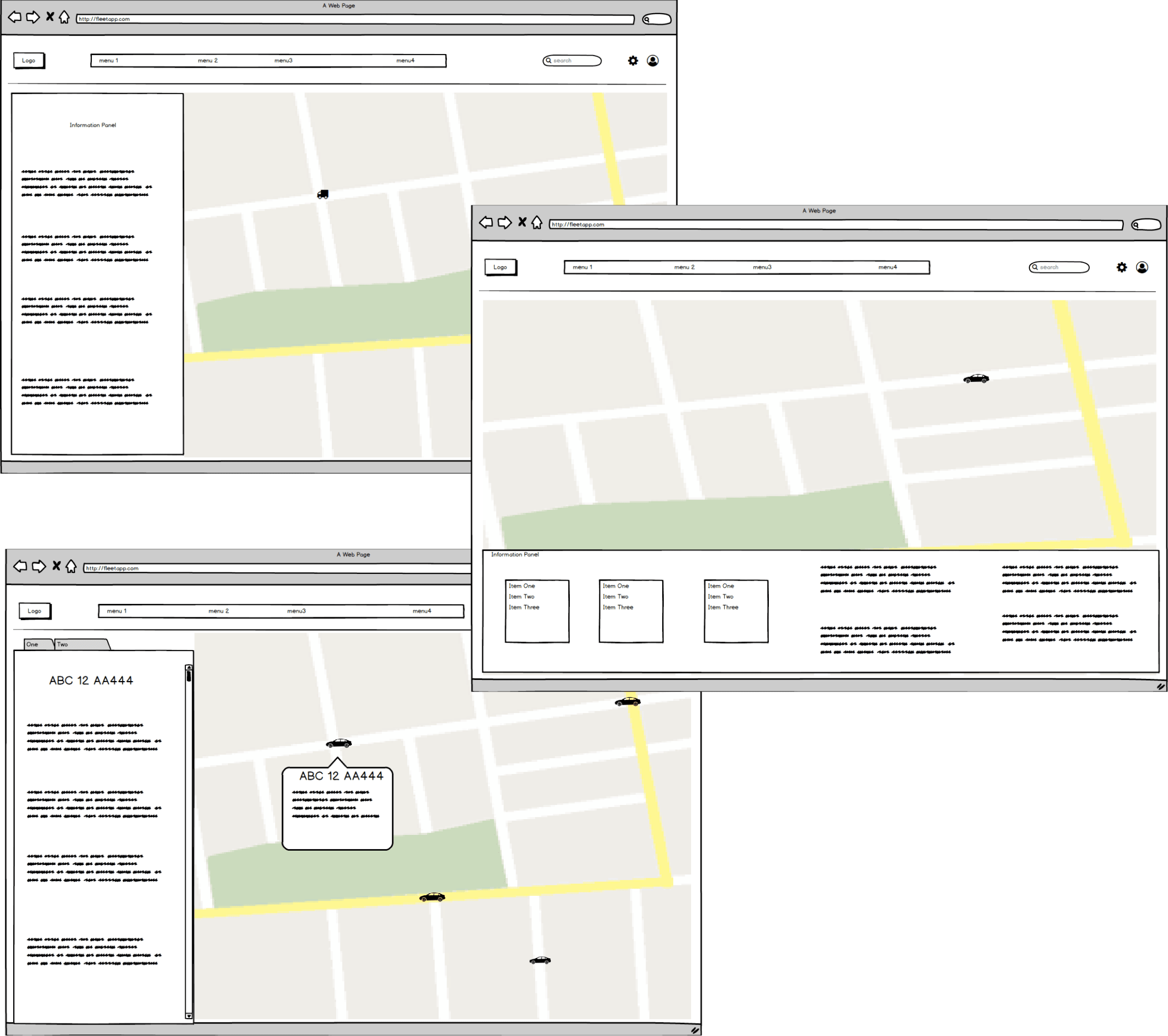 Images of the screen layout mockups done on Balsamiq tool

Once the layout was finalised, the task was to put together the right set of data items in a structured way so that the users could easily find the information.

I iterated on different ways to show the vehicle list and upon vehicle selection, navigating the user to the specific info about the selected vehicle. 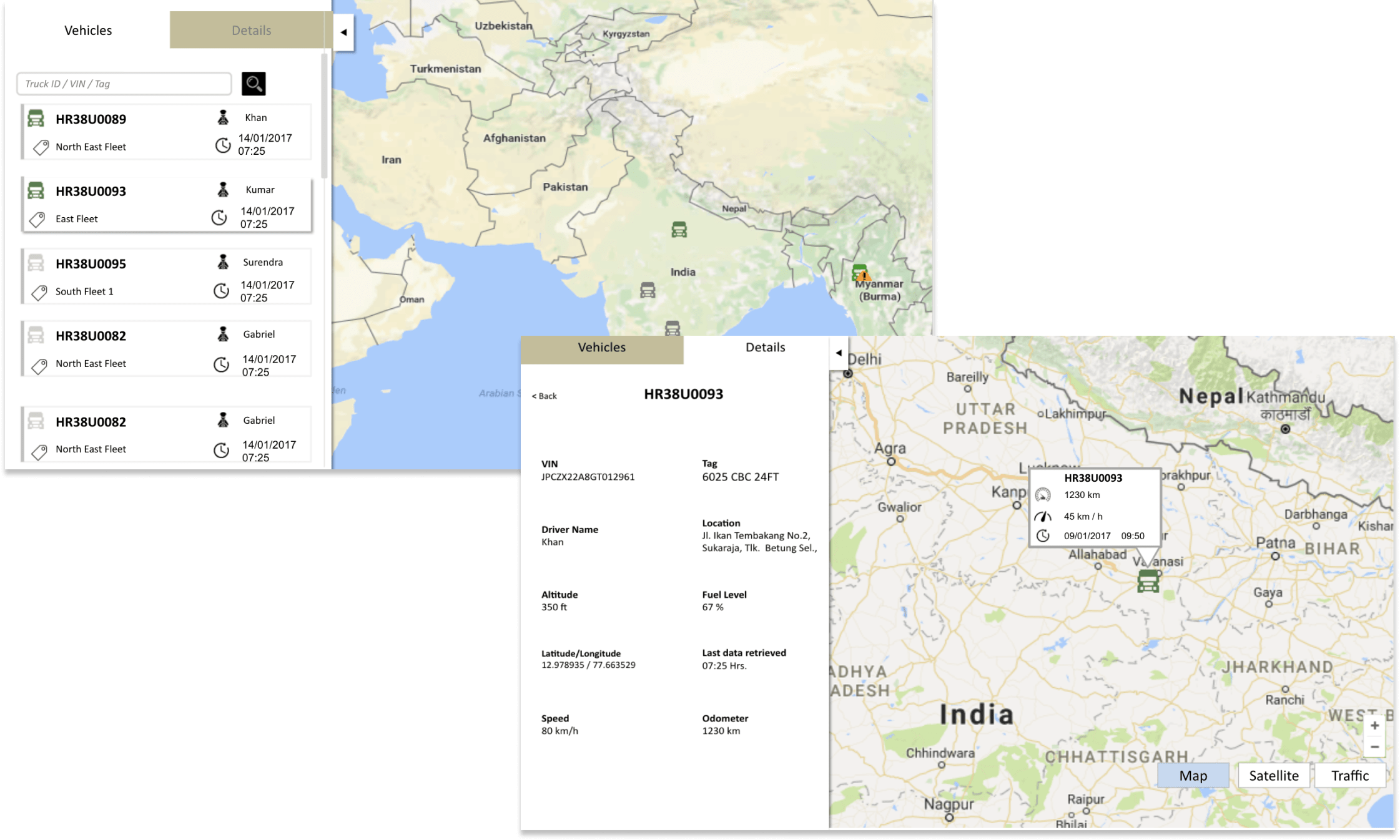 The vehicle list and the data set related to the specific selected vehicle were to be shown on two different tab within the left panel. On click, the left panel will expand and collapse there by enabling wider access to the map area. 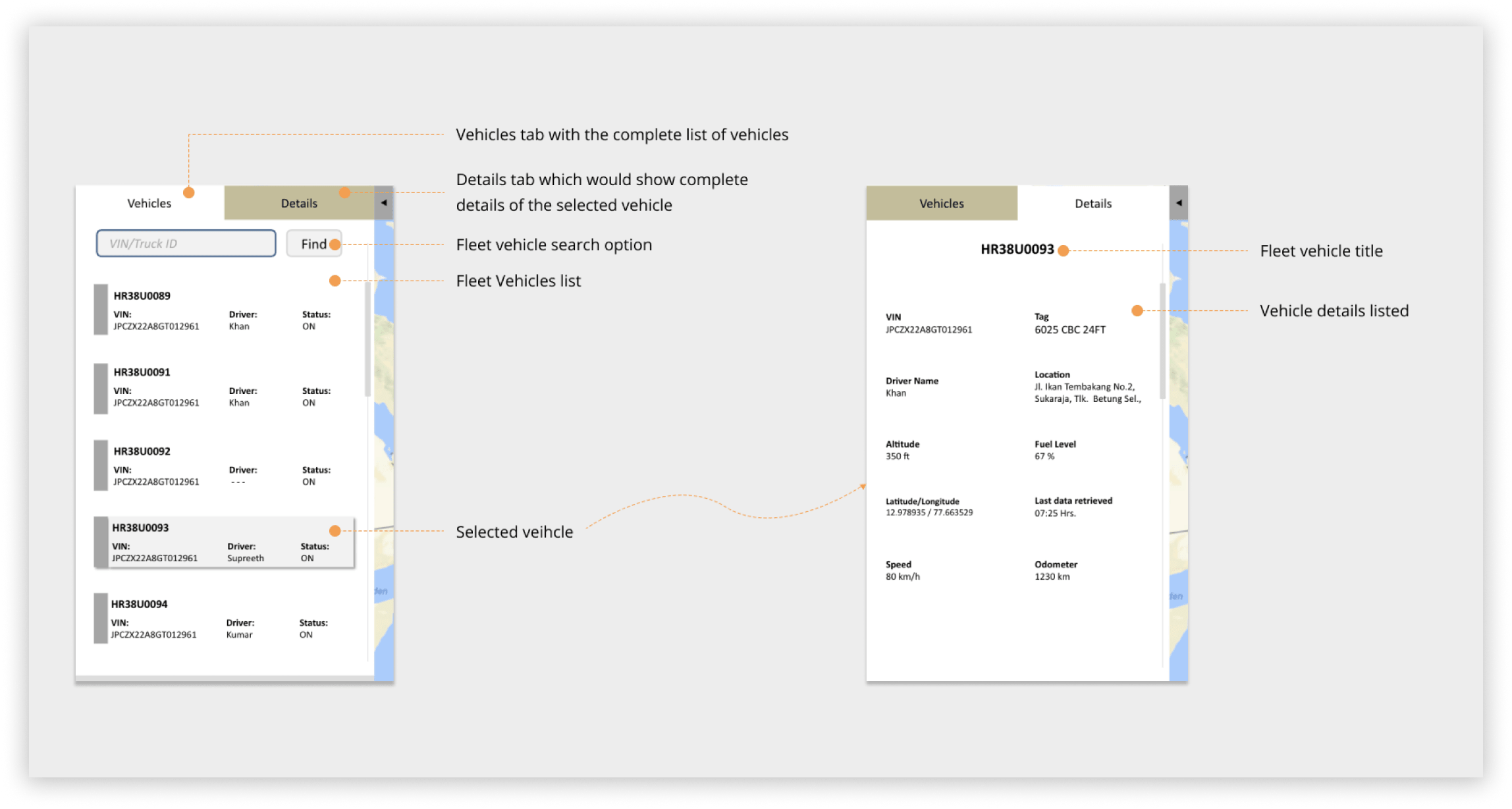 From quick user tests and reviews we got some early feedback about how the flow was perceived. Here are few of those: 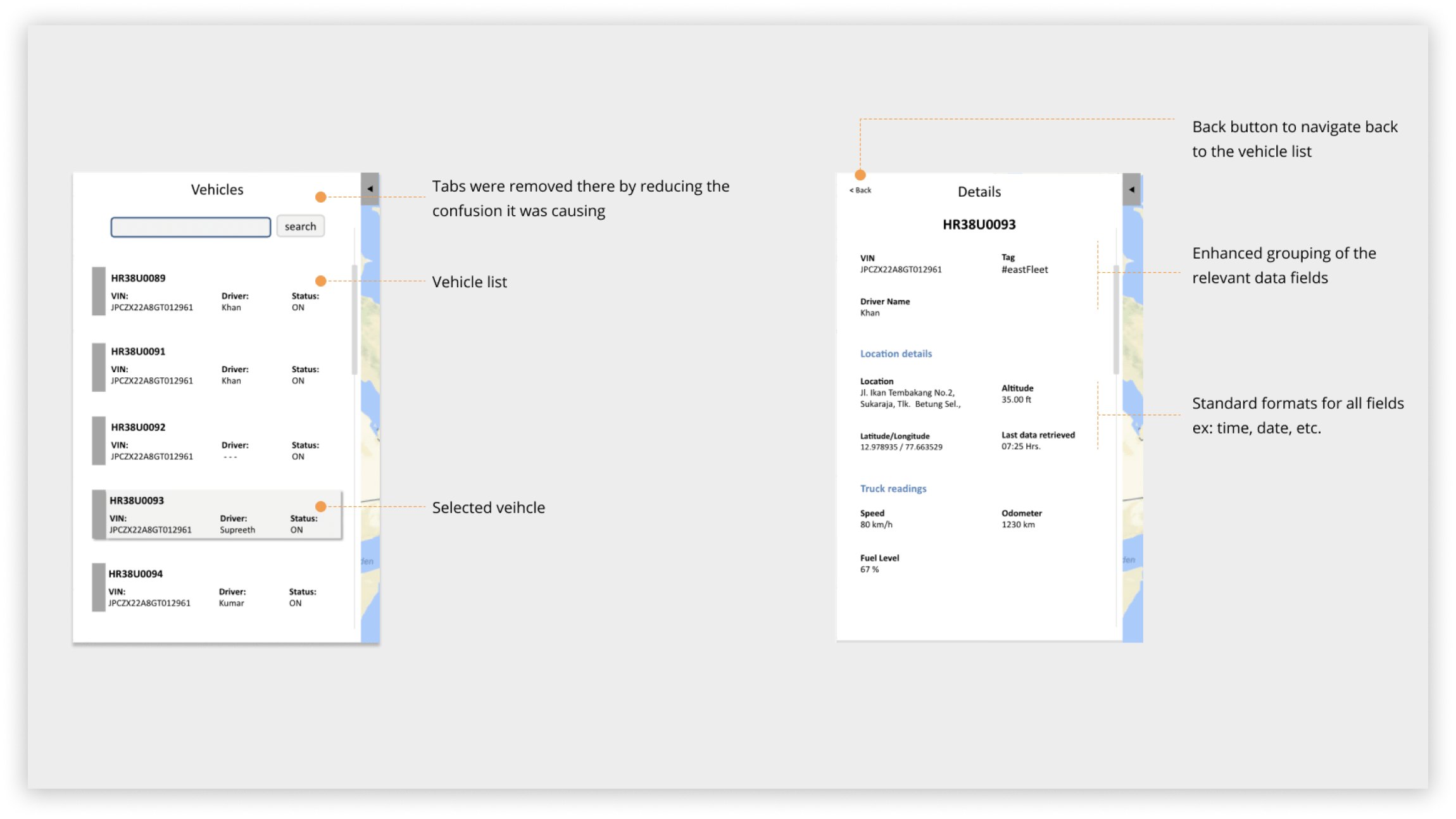 We went a few steps ahead and added some tiny features which would help our users significantly while using this information further in their day - to - day analysis.From quick user tests and reviews we got to know 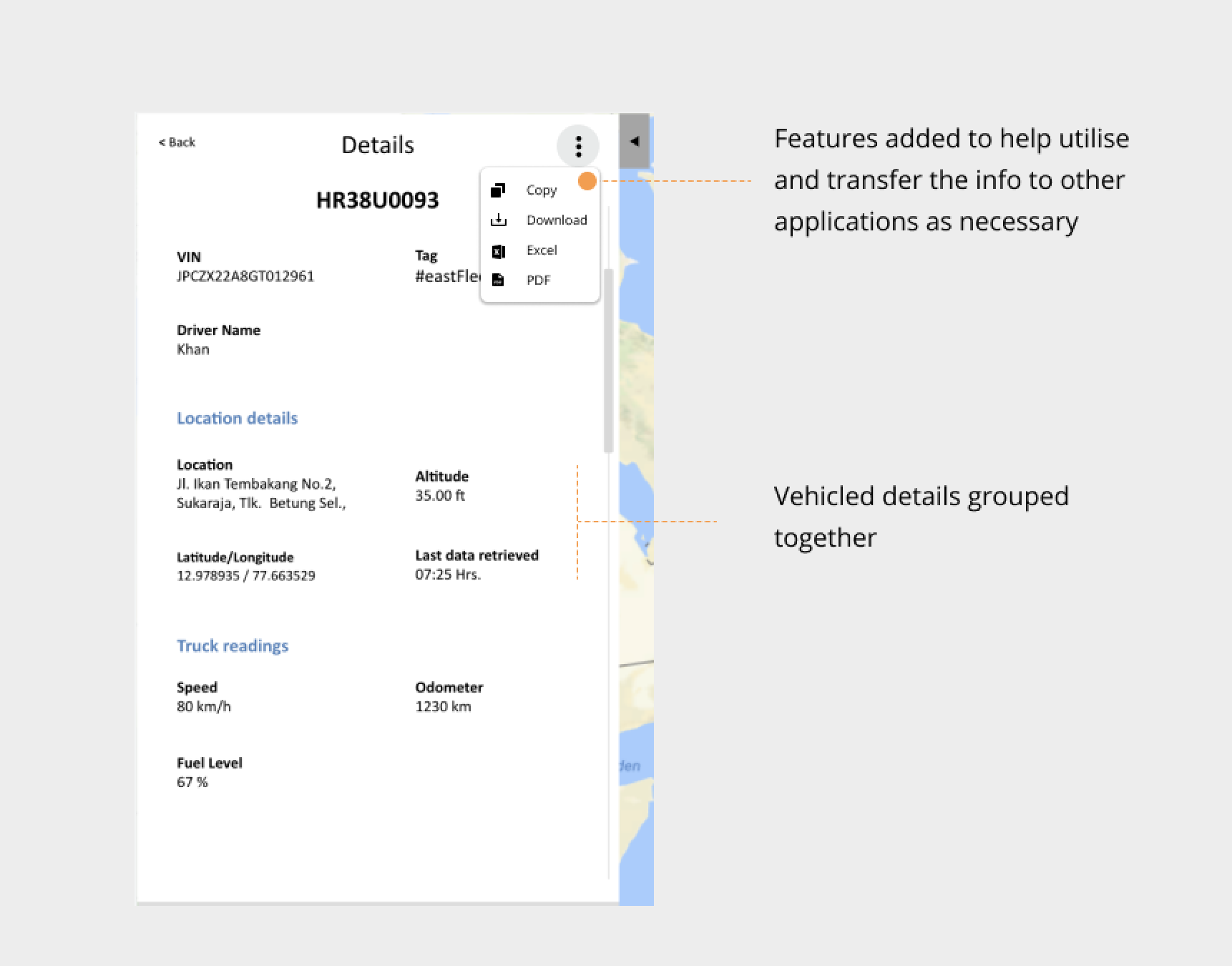 Vehicle Details on the left panel with additional features

Finish line or just the begining ?!

Wireframes were brought to life through visual designs. As this was my first stint with visual design, this was the most nerve wracking phase of the work for me.  It took a lot of effort and a number of iterations to the bring it to this level. 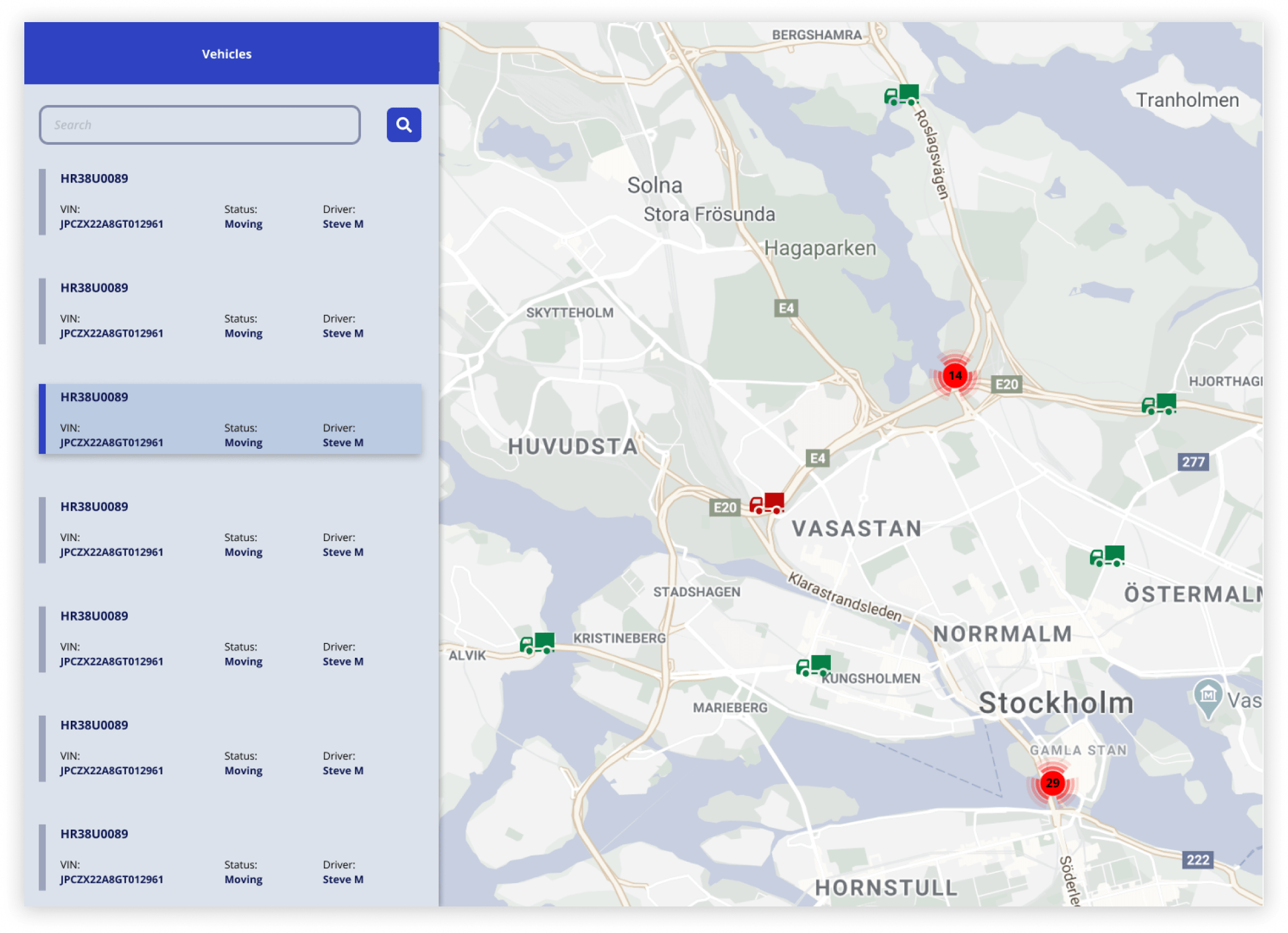 Image showing vehicle list and vehicles on the map. 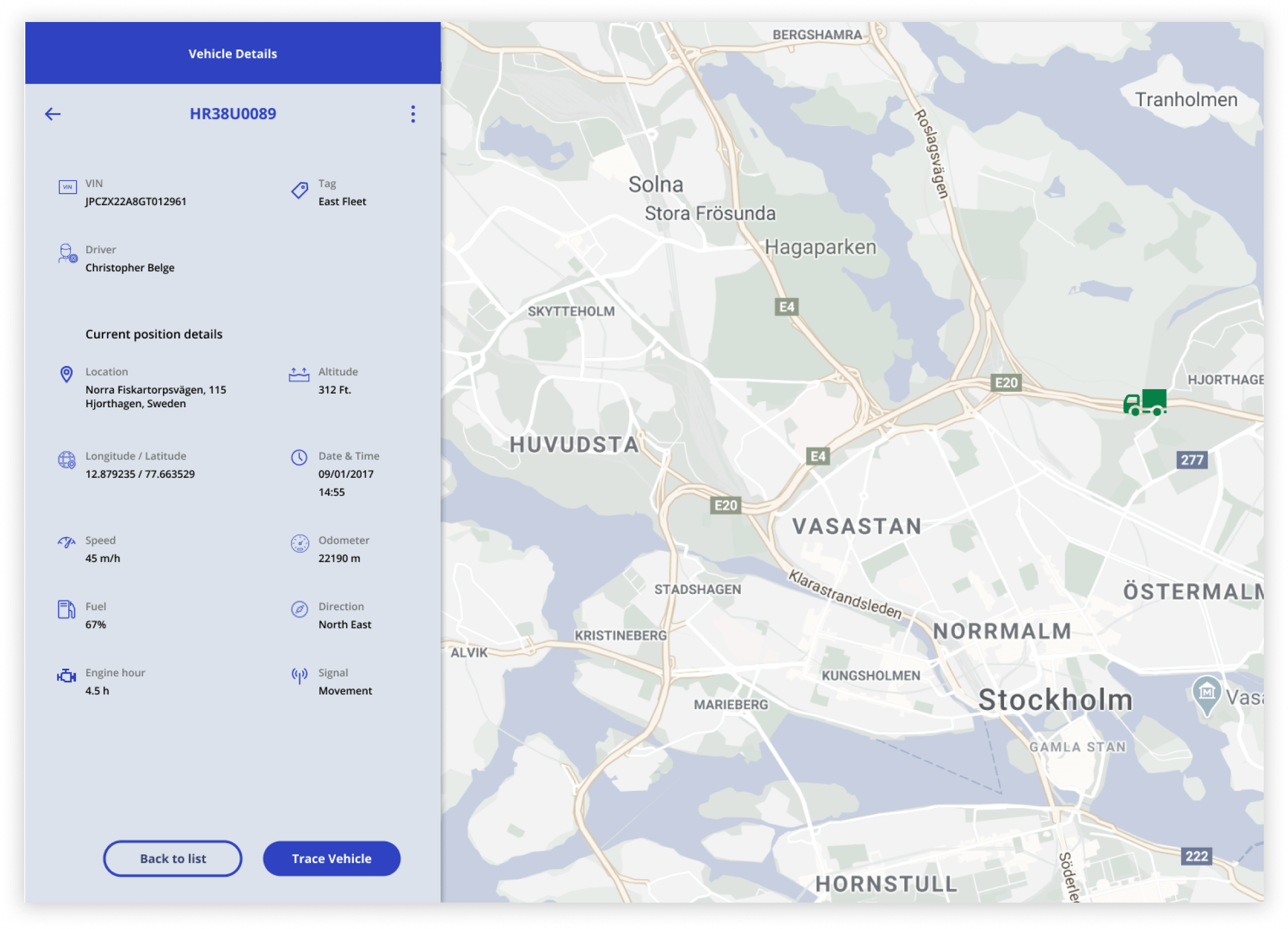 Image showing vehicle details and the selected vehicle on the map.

Relevant icons  were also used for representation of the different vehicle parameters for which the data was received.. 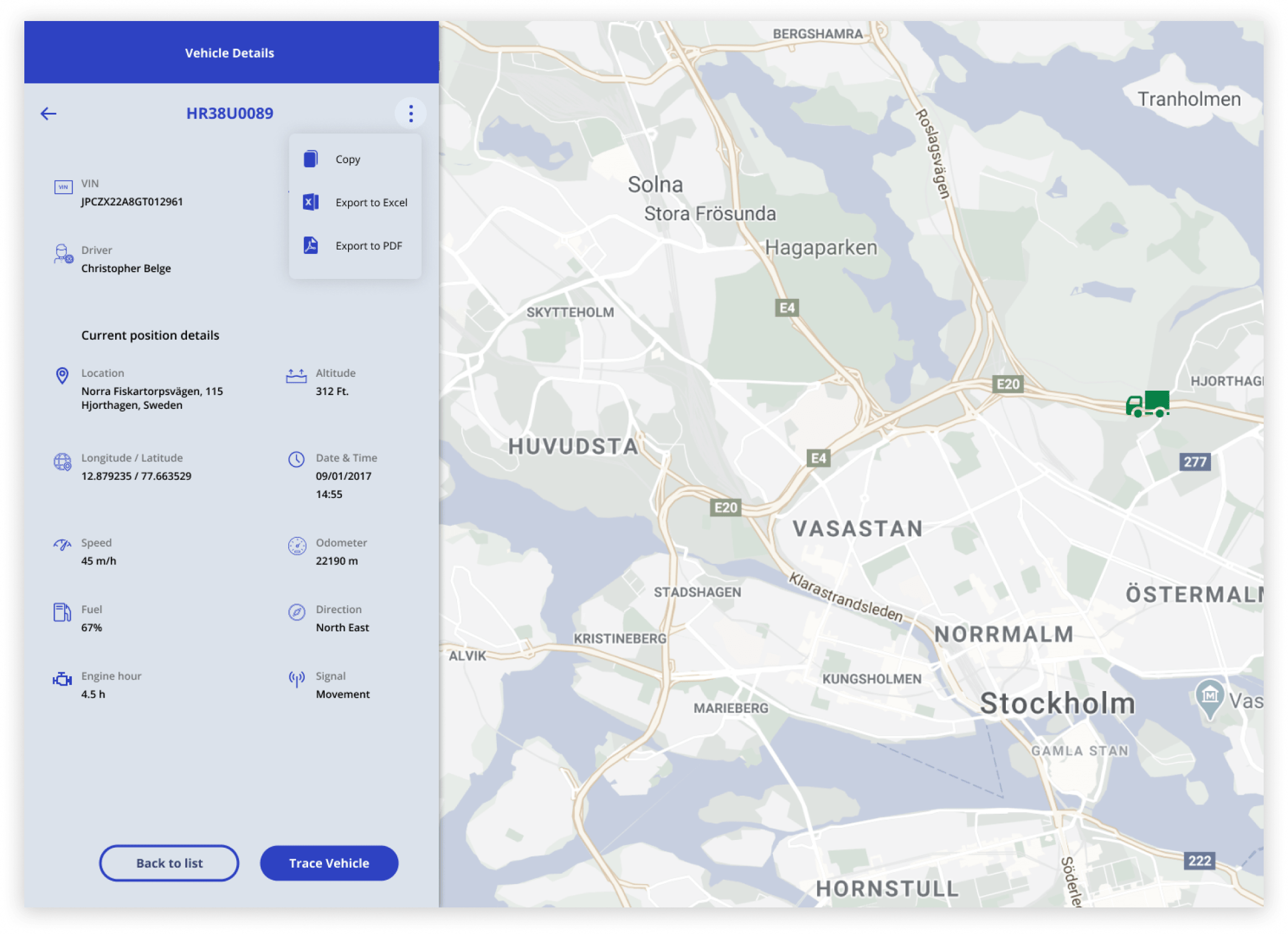 Image showing the exended menu with options to copy the details or export it to excel or pdf.

There is nothing more satisfying than hearing out the actual users of your product thanking you for easing not just their work but also the entire experience. Initial user tests helped in understanding the time for completion of various taks which were significantly better than before.
‍

Apart from the actual users, the design process and system put in place to improve the way of working was welcomed by all the internal stakeholders equally.

The interface so much more intuitive now, making it very easy to understand and start using the feature in no time.

Getting the information and using for other process is a breeze now, kudos to the team to making it so easy to use. Also, so less training needed now.

The process and the reference docs you have put in place will now keep me from disturbing you and will also make our coffee time conversations more intersting for not having to discuss those details.

Process keeps you on track

‍When I started with this work it seemed daunting as there was so much to do. I spent time initially to have a process in place which would help me by giving a direction to move and a path to reach the finish line without which I could have been lost.

‍People, be it the users or the team members you are working with, the more you involve them in the design process, the more postive results you can expect. Involing people for testing often helps you to  be on track for buidling the right product, in the right way.

‍Most cliched but the most relevant in design. Many times I was lured to do fancy stuff, but conscious efforts to keep unnecessary things out of the way kept me on track to keep things as simple as possible avoid complications.

If you would like to discuss any of my work further or would just like say a hi, feel free to connect.